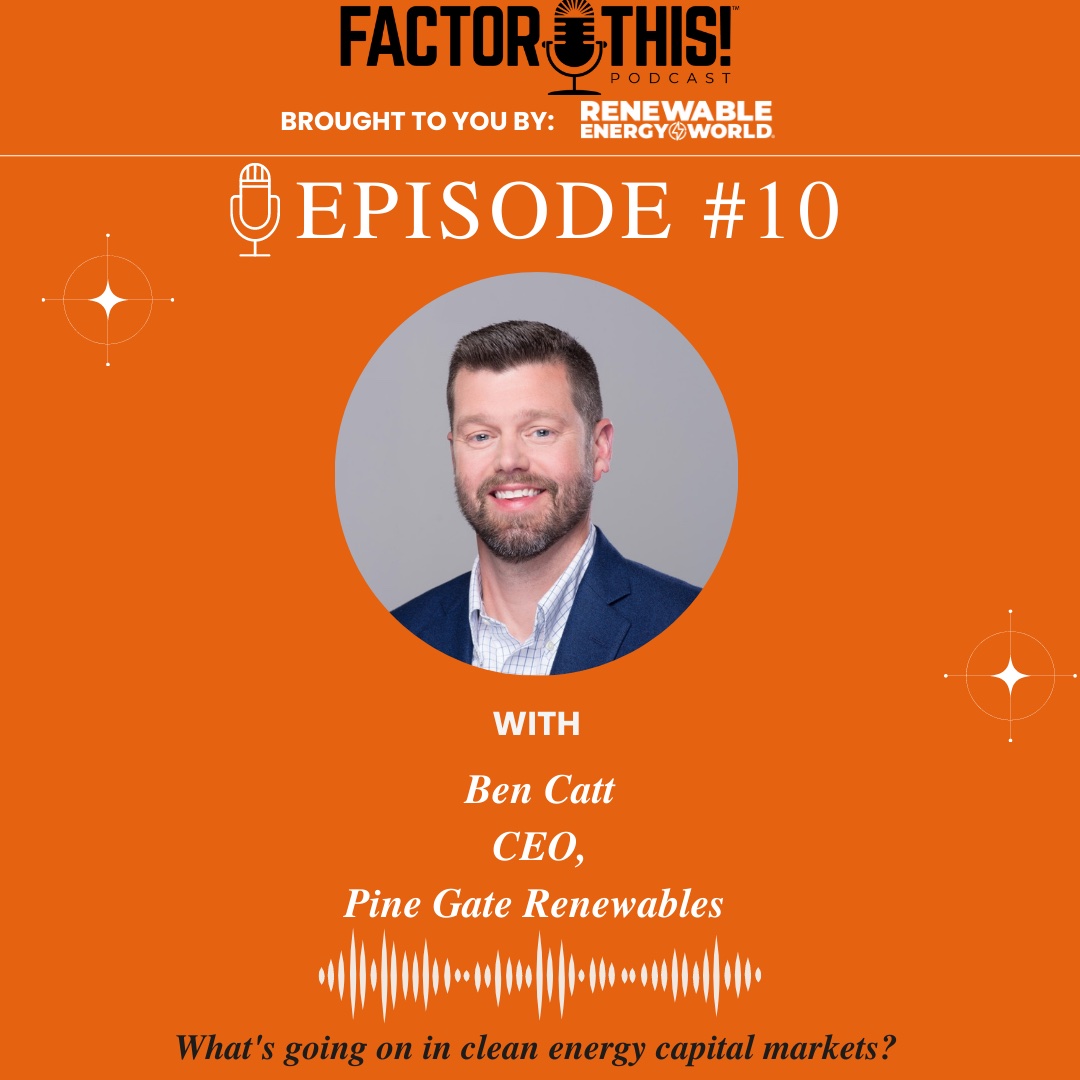 Think back to June.

Then came interest rate hikes to deal with record inflation which resulted in recession anxiety, further complicating the buildout of clean energy infrastructure.

As a result, while the tariff fears eased–at least for the next two years–how will clean energy capital markets likely react to the new economic uncertainty?

In Episode 10 of the Factor This! podcast, Pine Gate Renewables CEO Ben Catt breaks down what’s going on in clean energy capital markets. He’s fresh off raising $500 million for his utility-scale solar and storage development company. Plus, Catt shares how clean energy business models are evolving.

Subscribe today to the all-new Factor This! podcast from Renewable Energy World. This podcast is designed specifically for the solar industry and is available wherever you get your podcasts.

Pine Gate is among a class of clean energy developers that is looking to put more skin in the game.

For the past years, many developers looked to quickly flip assets to move on to new projects. There’s a growing recognition, Catt said, that green electrons hold a lot of value.

The value of the independent power producer (IPP) role is evident in several fundraising deals in recent months.

For example, Intersect Power raised $750 million to develop renewables and green fuels projects with a focus on long-term asset ownership. That is a shift from the power purchase agreement (PPA) structure that has ruled corporate procurement of clean energy over the past decade.

Next, Boston-based Longroad Energy ditched its “design to sell” business model and raised $500 million to build out its solar, wind, and energy storage pipeline for long-term ownership.

And, Apex Clean Energy, announced its evolution to an IPP with an infusion of equity capital in 2021.

“I can remember not that long ago when if you were going out with projects and they didn’t have 20/25-year contracts on them, nobody would return your phone call,” Catt saId. Today, he said, that that model has “shifted dramatically.”

Catt was at the neighborhood pool with his kids on the afternoon of July 27 when he heard the news: Sen. Joe Manchin, the big hurdle Democrats had to overcome to pass the most significant climate change and clean energy legislation in U.S. history, had reached a deal with Majority Leader Chuck Schumer on a reconciliation package.

“I walked over to my phone and saw, you know, 500-plus text messages from folks inside of Pine Gate, folks inside the industry saying, ‘Holy cow, what just happened?'” Catt said.

Catt sees the bill’s 10-year extension to the Investment Tax Credit and Production Tax Credit as giving everyone in the clean energy industry–developers and capital providers alike–the long-term certainty they have said they need.

Clean energy developers have grown accustomed to the rollercoaster ride that comes when Congress approves just two-year extensions to the ITC/PTC. Larger, more impactful projects simply don’t get developed because they don’t fit into the narrow window of opportunity, he said.

“It is incredibly difficult to raise capital into an uncertain environment,” Catt said. The Senate bill–although not yet across the finish line when Catt spoke with Factor This!–gives the clean energy industry certainty and clarity, Catt said. If it is signed into law, “we can go out…and really drive the growth that needs to happen here.”