Last week, President Joe Biden gave another national speech warning Americans that “democracy is on the ballot this year.” He was dead right about the election and its stakes. The majority of Republicans running for office in the midterms are “election deniers,” which is the media’s euphemism for flat-out enemies of democracy. They are champions of Trump’s 2020 attempted coup and often promise he won’t fail when he tries again in 2024. The efforts to throw out the votes and simpy install Republicans in office have already begun. Threats of violence are being used to run honest election officials out of office and to intimidate voters that MAGA deems “un-American.” To make it worse, polls show that not enough Americans seem to care if our democracy collapses. Republican voters are gung-ho to end democracy, of course, but potential Democratic voters are supposedly too checked out to make it to the polls and swing voters are skeptical that the threat is real.

Despite this impending doom, however, I notice that much of my news consumption this past week has not been about the midterms at all, but about gawking at Elon Musk’s comically disastrous takeover of Twitter. Did you see how, after he crowed about his love of “free speech” and “comedy,” he suspended a multitude of accounts simply for making fun of him? How he fired half of Twitter’s staff and then, realizing things would disintegrate without them, desperately started trying to rehire many of them? How, when legions of companies decided to “pause” advertising on Twitter rather than put their brands up next to the N-word maelstrom Musk has unleashed, Musk threw a childish tantrum accusing “activists” of conspiring against him and threatening to “name and shame” people who won’t just give him money?

The common wisdom is that the intensity of Musk/Twitter coverage is being driven by mainstream journalists, whose addiction to the platform clouds their ability to remember that, in the real world, no one gives a crap.  And it’s true that, despite its omnipresence in political media, Twitter ranks 15th among the most popular social media apps, behind TikTok and even Telegram. And yet, anyone who can read an internet traffic report can tell you that this Twitter story is way outgunning news about the election that will determine the fate of democracy. A Google Trends search looking at “Elon Musk” vs. any of the Democratic candidates in close Senate races shows Musk is clearly drawing a lot more interest. 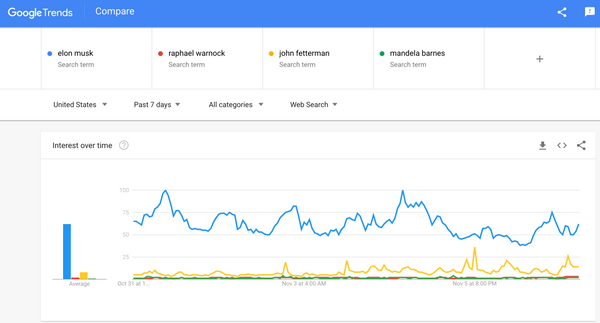 Same story when you search for “Elon Musk” and the Republicans in these races. 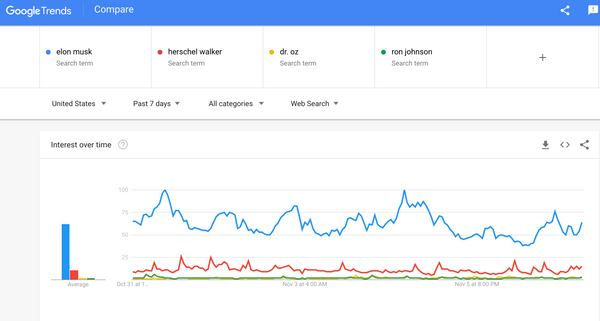 Republicans say they wish to “make America great again,” but in fact, their plan is to end the very democracy that conferred whatever greatness America ever had.

So what gives? Part of it, no doubt, is the schadenfreude of watching Musk fall on his face after he was able to fool so many people for so long into thinking he’s some kind of genius. But, if I may be an optimist about human nature for a moment, I also think it’s about something deeper. The story of Musk buying Twitter and the story of MAGA Republicans attempting to end democracy are in many ways the same story: Entitled dipshits whose resentments over a diversifying system lead them to take an ax to the very thing they claim to love. For Musk, it’s Twitter, a platform he claims he wishes to “save” but which he will likely destroy in record time. For Republicans, it’s the U.S. and democracy itself. Flat-out false claims of a “stolen” election are being used as a shield to wage all-out war on the very concept of free and fair elections. Republicans say they wish to “make America great again,” but in fact, their plan is to end the very democracy that conferred whatever greatness America ever had.

The collapse of American democracy is too big of a story to wrap one’s head around. It’s hard to know what it will look like if a bunch of Republicans seize state and federal power thanks to a handful of swing voters whose theory of political decision-making can be summed up by the shrug emoji. We know the plan, as Wisconsin GOP gubernatorial candidate Tim Michels promised, is “Republicans will never lose another election” again. We know elections Republicans lose will be invalidated, that votes will be thrown out, and a GOP-controlled Congress will simply refuse to certify the election if Biden beats Donald Trump in 2024. But the horror of what awaits us is too hard to look at directly.

Instead, we can look at what’s happening to Twitter, which is swiftly turning into a Nazi-drenched hellscape fueled by the grievances of crypto-buying misogynist dweebs. And I’m far from the only one who sees the destruction of Twitter under Musk as a synecdoche for what’s awaiting the entire country if Republicans win in the midterms.

You want to laugh at these idiots, but they are prepared to take over the country.

What’s especially resonant is how stupid this all is. Prior to Trump, the prevailing image of fascism in the American imagination was daunting: The impeccable and terrifying formation of Nazi soldiers heiling Hitler in a Leni Riefenstahl filmstrip. But the form fascism has taken in the U.S. is that of the gleefully moronic troll: Rep. Marjorie Taylor Greene of Georgia saying “peach tree” instead of “petri,” while trying to scare people away from vaccinations. Trump declaring that, while he may not be a doctor, his “good you-know-what” tells him that bleach injections to the lungs are a health treatment. It’s Rudy Giuliani holding a press conference to spread lies about the 2020 election and mistakenly booking it at a landscaping company’s parking lot instead of the Four Seasons hotel.

You want to laugh at these idiots, but they are prepared to take over the country. Taylor Greene may be an incoherent nimrod, but she is likely to be the point person on the fake “investigations” that are coming if Republicans take Congress.  Ben Shapiro of the Daily Wire may not know how vaginas work, but, as one of the most powerful propagandists of the right, he will guide the laws that are being passed to criminalize women for using theirs. Trump is poised to steal the White House in 2024, and what he’ll likely do with that power will make his first term in office seem like pattycakes.

It’s more than most people can handle, emotionally or mentally. Instead, we look at the smaller example of how Elon Musk’s takeover of Twitter is working out. So many echoes of the larger political situation in the U.S. The mass firing of staff, only to beg some of them to return? Reminiscent of how Republicans want to lay waste to the urban centers of the U.S., even though they are the most economically productive parts of the country. Musk’s self-congratulatory rhetoric about “free speech” followed by his banishing people for setting up parody accounts to mock him? That sounds an awful lot like how the Trumpers constantly complain about “cancel culture” while also banning books, terrorizing librarians and using police violence to silence peaceful protesters. Even Musk’s dumb plan to replace Twitter verification with a pay-to-play “blue check” program feels evocative of our larger problem of watching once-trusted institutions — such as the Supreme Court — being hollowed out and refilled with authoritarian hacks who have no fealty to facts, good faith or reason.

Indeed, the two stories are converging. Musk’s insistence that he’s entitled to advertiser money is being embraced by Republican politicians, who are threatening to legally terrorize companies who prefer to spend their money elsewhere. Which is to say, in the name of “free speech,” they’re trying to force companies who don’t want to sponsor racist speech to do it anyway.

So no, I don’t think we’re ignoring the impending doom of democracy when we gawk at Musk ruining Twitter. Instead, the Twitter story gives us a way to understand the much bigger tragedy facing down America if Republicans win. The loss of American democracy is too enormous of a story, with too many variables and unknowns, to even contemplate on its own. But we can funnel all our anxieties through this smaller, easier-to-understand story of the fall of a social media network to the same forces. It’s the same story, even if the scale and ramifications are wildly divergent.