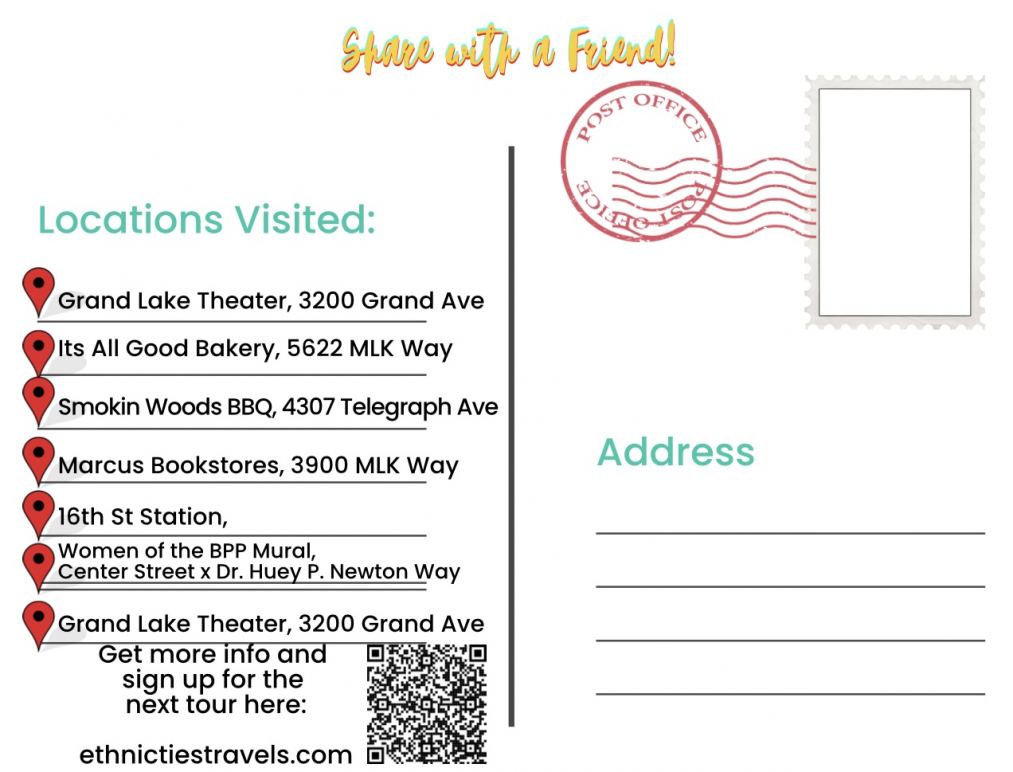 With Ryan Coogler being from Oakland and Marvel Studios’ worldwide hit Black Panther starring the much loved and missed Chadwick Boseman, having as a location Oakland in the script, The Black Oakland: Oakanda Forever Tour is the perfect marriage between art and commerce.

The brainchild of Acacia Woods Chan, “The Black Oakland Tour: Oakanda Forever, includes not only tickets to see the film at the historic Grand Lake Theater but a history tour and food experience that highlights the arts and history as the oldest Black bookstore in the nation, Marcus Bookstore named in honor of Marcus Garvey is visited.

Woods Chan, a Black Chinese multi-lingual small businesswoman with international ties, considers herself as a bridge between cultures. “Growing up in the Bay Area, I experienced the rich ethnic diversity and at the core of all I do is international hospitality bringing people together and what better way to do so than over a film that brings food for thought, communing over a meal at a Black restaurant and taking time to take in some of the history of the real Black Panthers,” said Acacia Woods Chan, CEO of Ethnic Ties.

“The Oakland International Film Festival is pleased to be associated with this event to promote among our friends and supporters,” said David Roach, Executive Director and co-founder of the Oakland International Film Festival that is in the midst of a yearlong celebration of it’s 20th year. “To tie in fiction with reality is a great way to especially get our young people energized about learning history and its impact on their lives. That’s one of the goals of this tour and film experience.”

Promotion of the tour and film comes from across the Bay as well. “The San Francisco Black Film Festival was founded by my grandmother, arts impresario, Ave Montague in 1998, a time when it took a concerted effort to get positive films about the worldwide African Diaspora.  As a young woman, leading an arts organization I am pleased to help support a fellow businesswoman,” said Cree Ray, Executive Director of the San Francisco Black Film Festival.

What can expected?   Click Here for Facts at a Glance:
https://www.prlog.org/12939892-ethnic-ties-oakland-intern…

The tour and film experience will be held on Saturday Only.  Tickets are $80 per person in alignment with most tours in the San Francisco Bay Area.  Tickets for the film only are a family friendly $11 and will be available Friday and Sunday shows:
https://www.eventbrite.com/e/black-oakland-tour-oakanda-f…