Many will talk about Scully’s bold rant against socialism while broadcasting to a Los Angeles-based audience likely consisting of many socialists or those sympathetic to it. But Scully’s most important imparting of values and patriotism may have come in a different setting shortly after that.

In November 2017, while thousands of NFL players, coaches, executives, and employees, were kneeling in solidarity with Colin Kaepernick every weekend, Scully spoke at an event called, An Evening with Vin Scully at the Pasadena Civic Auditorium. Scully was asked about the league’s response to the anthem protests. The legendary broadcaster did not hold back.

“I have only one personal thought, really. And I am so disappointed,” Scully said. “I used to love, during the fall and winter, to watch the NFL on Sunday. And it’s not that I’m some great patriot. I was in the Navy for a year. Didn’t go anywhere. Didn’t do anything. But I have overwhelming respect and admiration for anyone who puts on a uniform and goes to war. So the only thing I can do in my little way is not to preach. I will never watch another NFL game.”

Hall of Fame Dodger announcer Vin Scully on the anthem protests in pro football: “I will never watch another NFL game again.”@NBCLA pic.twitter.com/NEcPbZSrb2

That common sense sentiment of honor and respect for those who have fought for this country was probably a principle instilled in him at a young age and never even seriously questioned. Though at the time he said it, it was questioned. It was being questioned daily, and those with the “wrong answer,” such as Scully and probably everyone reading this article, were subject to scorn and ridicule. 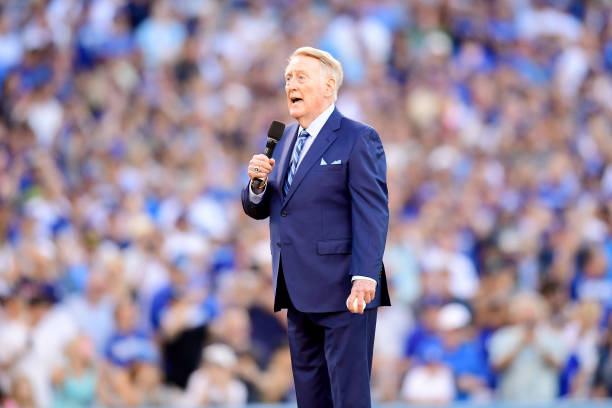 For Scully, a Los Angeles resident in one of the most highly visible positions in all of deep-blue California, that scorn and ridicule could have had far more severe consequences, personally and professionally.

But he didn’t care. He said it. Why? Because for all of his brilliant attributes as a broadcaster and a storyteller, Vin Scully’s best and most admirable traits were courage and honesty. The courage and honesty to rant against socialism when that was no longer cool, the courage to speak out against anthem kneeling when 99.999 percent of the sports media either agreed with it or were too afraid to disagree with it publicly, and the courage to man a broadcast booth by himself for decades.

Some will argue that Scully’s legendary status as a broadcaster protected him from consequences others might have faced for speaking out so forcefully against the left. Fair point. My response is he would have said it anyway.

Because, though he was brilliant, he was more brave than brilliant. And the courage to speak out in defense of what made his country great when the whole world was against him will always be, for me, his greatest legacy.