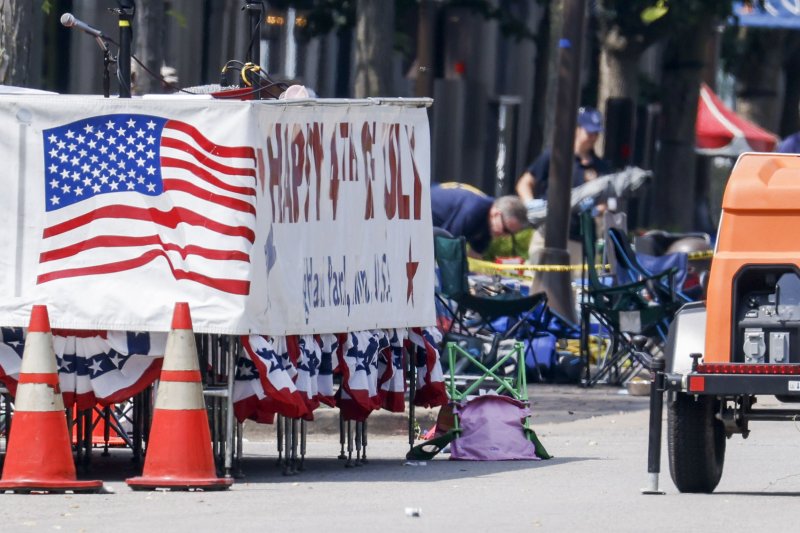 The suspect in the Fourth of July parade mass shooting, that killed seven people and injured dozens of others in Highland Park, Ill., has been indicted on 117 counts. Photo by Tannen Maury/EPA-EFE.

July 27 (UPI) — The suspect accused of shooting and killing seven people and injuring dozens of others at a Fourth of July parade in Highland Park, Ill., has been indicted on 117 counts, prosecutors announced Wednesday as they added 110 new charges in the massacre.

The 21-year-old is also facing 48 counts of attempted murder and 48 counts of aggravated battery with a firearm for each parade victim who was injured by a bullet or shrapnel.

Crimo was initially charged with seven counts of murder after his arrest. He will appear in court next week to be arraigned on the new charges.

“I want to thank law enforcement and the prosecutors who presented evidence to the grand jury today,” State’s Attorney Eric Rinehart said. “Our investigation continues, and our victim specialists are working around the clock to support all those affected by this crime.”

Crimo, who was taken into custody a few hours after the shooting near Chicago, confessed to opening fire on the parade crowd from a nearby rooftop. He is currently being held without bond.

Authorities believe Crimo had planned the mass shooting for weeks. They said Crimo used a “high-powered” weapon and fired more than 70 rounds into the crowd of parade participants and attendees before dropping his rifle.

Crimo also dressed as a woman and wore makeup to hide his facial tattoos to blend in, said Chris Covelli, a spokesman for the Lake County Major Crime Task Force.

Authorities told reporters that police had had previous run-ins with Crimo, but never saw a sufficient basis to establish a clear and present danger. Crimo was granted a permit for his weapon and had passed four background checks in 2020 and 2021.

Highland Park Mayor Nancy Rotering said Crimo bought the gun legally in Illinois. Police found a second rifle inside his mother’s vehicle, which he was driving when he was stopped by police and arrested.