The White House spent days prepping for negative news on the economy and trying to push back on one of the unofficial definitions of a recession. When that news inevitably arrived on Thursday morning, the panic continued, with administration officials doubling down on their declaration that the U.S. is not currently in a recession.

Thursday’s Gross Domestic Product (GDP) report indicated that the economy shrank 0.9%, marking a second straight quarter of decline and meeting one of the most common, though not the only, definitions of a recession.

In the days leading up to the report, White House officials sprang into action, going on networks and telling the nation that the economy is still strong and there’s no indication of a recession.

White House press secretary Karine Jean-Pierre, for one, spent the week fielding questions on the topic from the press. Throughout the week, she repeatedly declared that a second straight quarter of decline is “not the definition” of a recession. At the same time, she declined to detail the administration’s official definition, only noting that they rely on “indicators” used by the National Bureau of Economic Research (NBER).

The NBER is an independent group of economists who investigate and give analyses on “major economic issues,” according to the non-profit’s website.

Brian Deese, the Director of the National Economic Council, also came out swinging in an effort to try and quell recession fears. He appeared on CNN on Monday and also argued that the incoming GDP report would not indicate a recession, highlighting the jobs created under President Joe Biden.

“Never in the history of our country have we had a recession where the economy was creating jobs, period,” Deese told the network.

“Certainly in terms of the technical definition it’s not a recession,” he added. “The technical definition considers a much broader spectrum of data points. But in practical terms, what matters to the American people is whether they have a little economic breathing room, they have more job opportunities, their wages are going up — that has been Joe Biden’s focus since coming into office.”

Meanwhile, the White House Council of Economic Advisers put out a blog post on July 21 declaring “that two consecutive quarters of falling real GDP” does not equal a recession.

“While some maintain that two consecutive quarters of falling real GDP constitute a recession, that is neither the official definition nor the way economists evaluate the state of the business cycle,” the council wrote. “Recession probabilities are never zero, but trends in the data through the first half of this year used to determine a recession are not indicating a downturn.”

Treasury Secretary Janet Yellen got in on the action, too, repeating the White House talking point that two quarters in a row of declining GDP isn’t the definition of a recession. She told NBC’s Chuck Todd on Sunday that this is “not the technical definition” and later said she’d be “amazed if they [NBER] would declare this period to be a recession.” 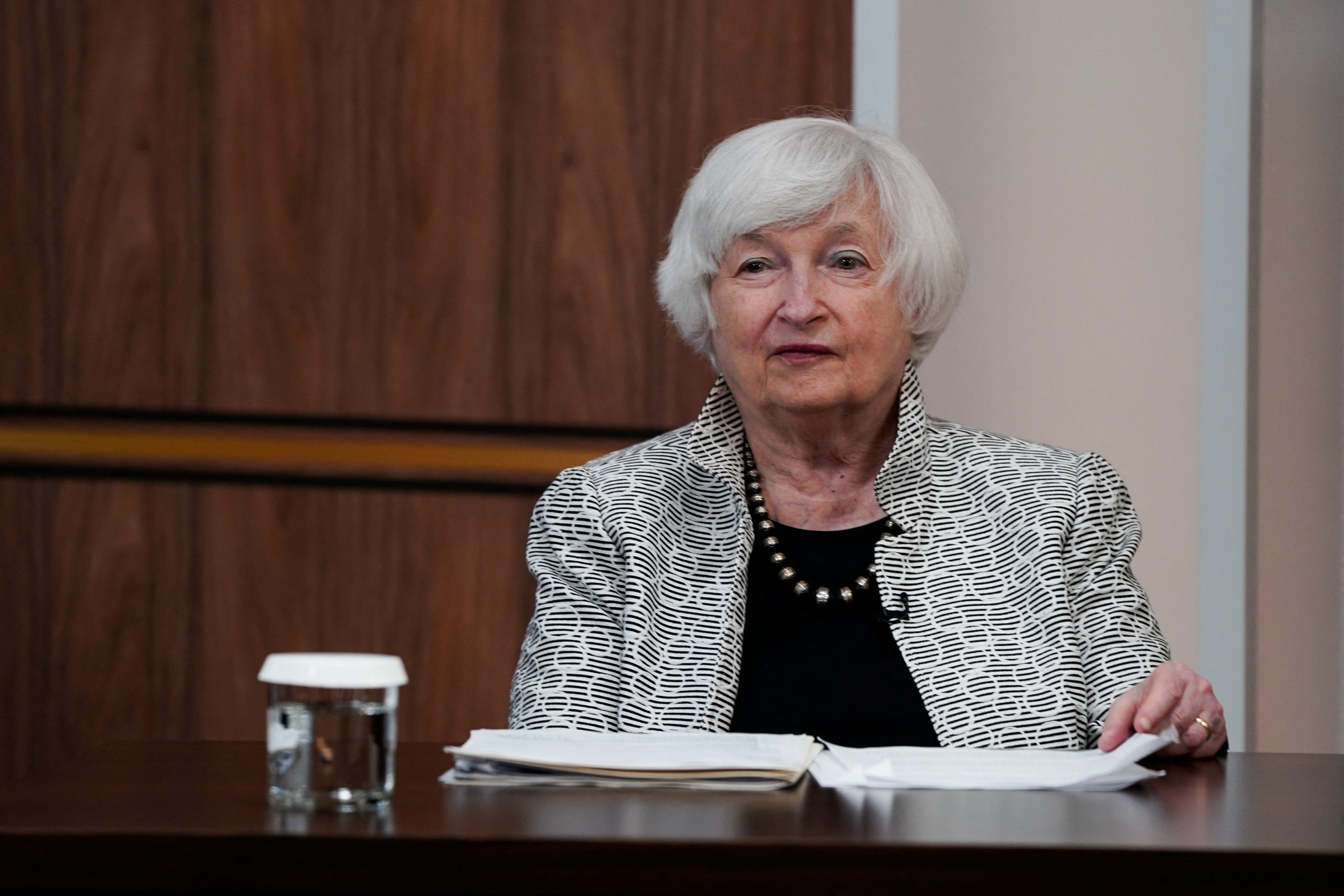 The doubling down continued after the release of Thursday’s report. Biden issued a statement proclaiming that, despite the data, the U.S. is “on the right path.” He suggested the economy slowing down is “no surprise” because the Federal Reserve was making moves “to bring down inflation” and because of “last year’s historic economic growth.”

The word recession was notably absent in the president’s statement, and the president would later expand on his argument during remarks to the nation.

White House Economic Adviser Jared Bernstein echoed Biden’s positive spin during an appearance on Fox News just hours after the GDP report came out. Bernstein told the network that the administration had not tried to get ahead of Thursday’s data earlier in the week.

“I think it’s a statement of the way these measures are scored by the group that decides whether we’re in a recession or not … Secretary Yellen is correct,” Bernstein said, referring back to one of Yellen’s arguments that a recession is not “inevitable.”

“When you’re adding 1.2 million jobs in a quarter, over 2 million in the first half of the year, it’s simply inconsistent with a recessionary call,” Bernstein continued.

Economists who spoke to The Daily Caller noted that two straight quarters of decline has become an unofficial indication of a recession, though there’s some debate on whether the U.S. is now in a recession.

“I think the White House’s argument is a little weak. The issue, the definition of a recession — while it’s not completely set in stone — it’s pretty well recognized that if you have a situation where you have two or more quarters of a decrease in economic output, that that pretty much is what the signal of a recession is,” Steve Pociask, president and CEO of the American Consumer Institute (ACI), told the Daily Caller.

“All economists should be comfortable with the basic statistic benchmark that two negative quarters is a signal for a recession,” he added.

Pociask brought up the administration’s argument, explaining that NBER economists will “get together” to “come up with what the exact starting point of a recession would be and when it would end.” Because of this, he said the “official start date of this recession” will remain unknown for a few more months.

“It’s a weak argument they’re [the White House] making. Virtually all economists would say, ‘Hey, it’s too negative quarters, so that’s kind of where we are.’ … It’s just a very weak argument that they’re making,” Pociask said, later noting that there is “a teeny bit of wiggle room” in the current argument.

Brian Riedl, a senior fellow focused in part on economic policy at the Manhattan Institute, told the Caller that “of course” the White House will argue that the country isn’t in a recession. Riedl continued on to back the administration’s viewpoint, saying he believes we are “probably not in a recession right now.”

“GDP is down very slightly, but other economic indicators such as jobs continue to be strong, and that probably does not meet the technical definition of a recession. Furthermore, there is a chance that GDP growth could be revised upward into positive territory at some point in the next couple of months,” he explained.

While Riedl explained to the Caller why he doesn’t see the country as currently being in a recession, he also noted that two quarters of negative decline is “the shorthand definition” of a recession.

Ultimately, however, many of the economists the Daily Caller spoke with felt the argument of whether the country is officially in a recession or not should not be the main focus. (RELATED: Are We In A Recession? It Doesn’t Matter To Americans Who Are Hurting, Economists Say)

“Whether or not we’re technically in a recession is really secondary to the fact that real wages have fallen 3.6%, people with fixed incomes have been hit with 9.1% inflation eating away at their wealth and people are really struggling. Whether it’s technically a recession or not is really just kind of a messaging argument,” Riedl said.

“You can call it a recession, you can call it not a recession, it doesn’t change the fact that groceries, electricity, gas, airline flights, everything is so much more expensive … and families are clearly falling behind and their wages aren’t keeping up,” he added.

Pociask echoed this point of view, noting that he can “see” the administration’s argument but that it should not be something the White House leads with.

“It’s just completely insensitive to the fact that what consumers care about right now is inflation … even the recent decline of 50 cents or so with gasoline, that’s not going to be enough to stop the spiral,” Pociask said.