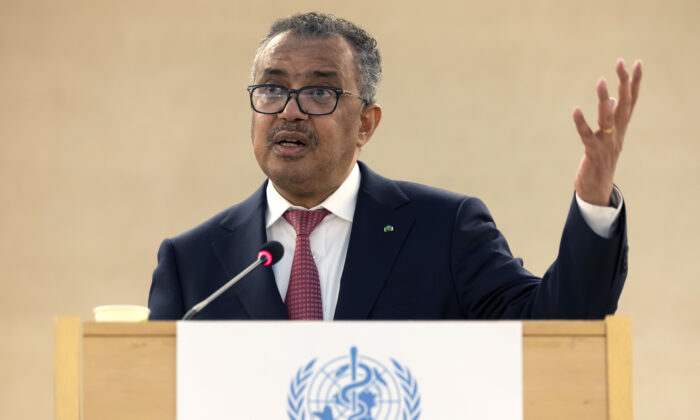 Tedros Adhanom Ghebreyesus, Director General of the World Health Organization (WHO), delivers his speech after his reelection, during the 75th World Health Assembly at the European headquarters of the United Nations in Geneva, Switzerland, on May 24, 2022. (Salvatore Di Nolfi/Keystone via AP)

The head of the World Health Organization (WHO) advised men at risk of catching monkeypox to consider reducing their sexual partners.

WHO Director-General Tedros Adhanom Ghebreyesus said 98 percent of the monkeypox cases detected since the outbreaks emerged in May have been among gay, bisexual, and other men who have sex with men. He called for those at risk to take steps to protect themselves.

“That means making safe choices for yourself and others, for men who have sex with men,” Tedros said at a news conference on Wednesday. “This includes, for the moment, reducing your number of sexual partners.”

Infectious individuals should isolate and avoid gatherings involving close, physical contact, while people should get contact details for any new sexual partners in case they need to follow up later, the WHO chief said.